Hello to my fellow blogolites.

I must make an admission right from the start.  This blog is going to be long and have a lot of pictures.  There is no other way I could do this blog today because it was a truly spectacular and moving morning in Rome.

The day began with an 5:30am wake up call so that Tim and I could head over to the Pontifical North American College.  It was an opportunity to get some pictures of the American Cardinals as they boarded a bus for the Mass at St. Peter's.  The walk over is short but we always have to climb a number of stairs to get to the NAC. 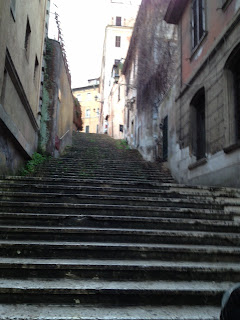 We waited along with the other press in the rain for the bus to arrive to take the Cardinals.  It was the usual chit-chat and small talk and everyone was in a good mood.  We started to notice seminarians gathering along the road.  The bus arrived and the Cardinals exited the building and made their way to the bus.  Some waved to the press while others just smiled. 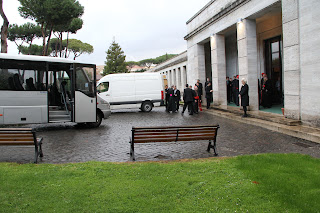 The bus made its way down the road with the seminarians lining either side.  It seemed as though the whole college was there.  The men clapped and cheered as the bus slowly went by them.  The bus turned a corner and then was gone. 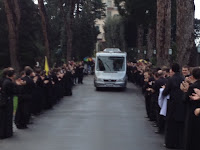 From the NAC we made a quick dash down the hill and hurried to St. Peter's Basilica.  We had heard we should get there early for the 10am Mass and that was our goal.  Upon arrival we were deflated to see a long line and it was only 7:30am!  We got in line and within minutes the line doubled and then tripled in length. 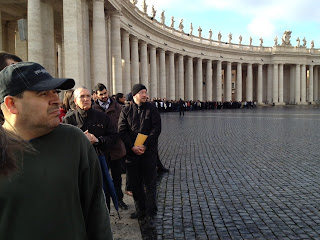 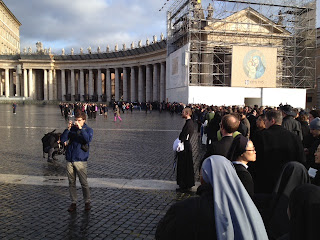 As I got inside I was pleased to find that I was going to be relatively close up.  I sat and was struck by a couple of things.  First at the number of very young nuns who were in the Basilica. 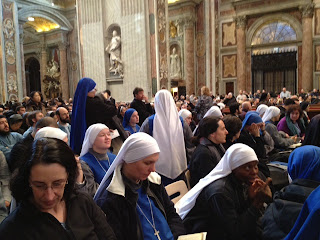 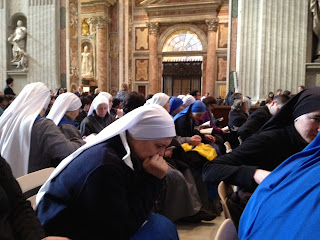 They were everywhere and all were smiling and happy.  They were also looking out for each other and saving seats.  It was refreshing to see so many young woman decide to dedicate themselves to Christ.  There was a bounce in their step and a vibrancy about them.  It just made me feel good.
When I looked up at the altar I noticed two things immediately.  The first was the cross over the altar and the second was the empty chair.  That chair would be used later but it made me reflect on the fact that at this moment we do not have a pope and there is an emptiness. 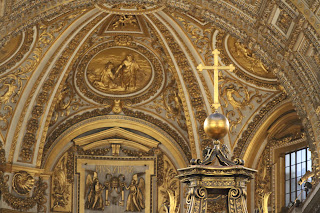 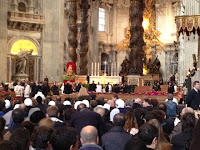 They prayed the rosary in many different languages but all with the same intent.  To pray for the Holy Spirit to guide the Cardinals in their deliberations to elect a new Holy Father.  It was very moving hearing the whole congregation joining together as one powerful prayer community. 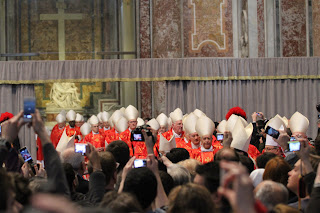 As we finished praying the rosary a hush fell upon the people in attendance.  The music started and the Cardinals began to process down the main aisle.  But something was different.  For the week before the Cardinals had been out and about.  Before they agreed not to talk to the press they spoke with reports, laughed, and spoke with the faithful.  Now everything had changed.  There was a seriousness, a focus that is tough to describe.  They seemed in the zone.  As they processed, my mood changed also.  I felt nervous and even frightened for the them and the weight of the decision that they were going to have to make.
It was during the second reading that their responsibility resonated even more for me.  In his letter to the Ephesians St. Paul wrote, "We must no longer be children, tossed to and fro and blown about by every wind of doctrine, by people’s trickery, by their craftiness in deceitful scheming" (Eph 4:14). The Cardinals must make a decision not based on public polls or  today's social norms, but on the truth presented by Christ.  In the Gospel of St. John the message was clear. "You did not choose me but I chose you."  A chilling line that shows God's great love for us. 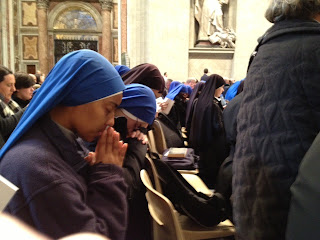 During communion the congregation knelt on the stone floor and prayed.  In a special way I remembered all of you who have asked CatholicTV for prayers.
I watched as one by one the Cardinals went to the altar and received The Eucharist.  I could only image what they were thinking.  It seemed though that they were at peace.  Knowing that Jesus was with them at this historic moment.  But the weight of the decision that is before them is enormous and will be studied and talked about for centuries to come.  From the beauty of the liturgy it seems they do not take this task lightly.
As they processed out of the Basilica the congregation all came to the barriers to get a closer look. 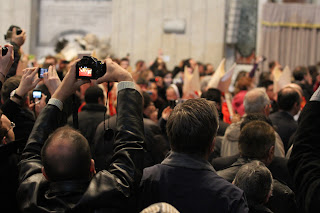 A person in the crowd began to clap but a Cardinal gently motioned for him to stop.  This was not about them.  This was about the Church founded by Jesus.  Please pray for these Cardinals as they begin the Conclave and may God guide their decision.
Your Friend,
Jay

Your gift helps CatholicTV deliver the Good News into millions of homes across the nation. We need your support to continue connecting people with Christ and the Church.

CatholicTV is a powerful community of prayer. Send us your intentions; we will all pray for you!

Join CatholicTV’s online community and share your Faith with so many others in so many ways. We are the living Church online.

Be part of the CatholicTV family of viewers. Stay in tune with what’s on and what’s coming up on your favorite Catholic television station!